skip to main | skip to sidebar

In Which I Review Joseph Boyden's The Orenda 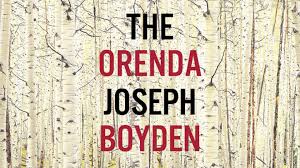 When I was about 12, my dad took me and my brother and my little sister on a historical tour of Ontario. We visited Fort George then up to Kingston to Fort Henry and the landing where Molly Brant came after fleeing the Haudenosaunee homelands in New York State. My dad is an amateur historian, and his focus is on Haudenosaunee/European relations in the 17th and 18th centuries. You’ve not lived until you’ve seen him at one of those funky re-enactment gatherings they have in upstate New York – but I digress. Then we travelled north to Midland, to visit Sainte-Marie-Among-the-Huron.

I remember it was a beautiful early summer day, with the sky so blue. I ignored the carefully rebuilt European houses and chapel and instead spent all my time wandering through the reconstructed longhouses. I have long been fascinated with our ancestors and the way they lived their lives before contact. I remember my dad had to coax me away from the longhouses so we could go on the tour. We followed the group around as the tour guide regaled us with the history of the mission. My dad started to grin, and as the tour guide continued, started to giggle. A six-foot-four Mohawk man giggling is completely out of the ordinary. While my dad enjoys a good laugh, he’s not one to giggle. So finally when the tour guide got to the part about the people there abandoning the mission for fear of a Haudenosaunee invasion, my dad couldn’t contain himself. I asked him why he was laughing. “They were so scared of us!” he replied.

I have always remembered that. Indeed just the idea of the “savage Iroquois” was enough to send shivers down the spines of good Catholics for years later, and Pauline Johnson made a career out of her poetry that celebrated our fierceness and warrior-reknown. Over the years I've learned it's pretty much a myth, that my people were a lot more complex than that, but no one has ever broken that stereotype about us.

So it was with great anticipation that I downloaded Joseph Boyden’s The Orenda last week, hoping from what I had read it was going to be a work that would tear down the colonizer’s view of my people and tell this story from an indigenous point of view, to give voice to our ancestors to honour and make our history and sense of how they lived their lives more accessible. I had high hopes for this book, having loved both Three Day Road and Through Black Spruce, his poetic prose lingering with me for days.

For the first third, this book is a masterpiece. The narrative voice is strong, with evocative and poetic descriptions of our lands in the time before colonization really took hold, when this territory was truly our place. There’s enough detail about how the people lived and their traditions to satisfy my long-held fascination with story of my relations. And at first blush, the character of the Haudenosaunee girl Snow Falls, who is taken captive by the Wendat warrior Bird, was dimensional to me because her feistiness and fierce spirit reminded me of my own daughter.  Her resistance was very real, knowing what the character of most Haudenosaunee girls is like. I really enjoyed her struggle to understand and deal with her captivity and how she matured into a woman despite her circumstances.

However, as I got more into the book, my inner alarm bells started to ring. Beneath the beautiful prose the conflict between the Wendat and the Haudenosaunee is not explained beyond what the colonial history tells us. I was hoping for more, perhaps a nuanced discussion of why these great nations clashed so violently. After all, the Peacemaker came to us from the Wendat, our languages and customs are so remarkably similar that modern-day archeologists have to really examine their pottery to determine which nation lived in uncovered village sites. The Mourning Wars had engulfed the entire territory by the time the Peacemaker and Ayenwatha had joined forces to create the Great Peace and the League of the Five Nations. Surely this great conflict was motivated by more than a struggle for control of the fur trade, as the colonial history tells us. That may very well be what the Jesuit observers and the colonials who traded with us might have thought, but I have a better theory. I think that after the Peacemaker formed the League and gave us the Condolence Rite, we had offered the Great Peace to our Wendat cousins and asked them to come to us, to be condoled and sit with us in the House of the Long Leaves at the roots of the Great Peace. But they had their own okiware, their Feast of the Dead (which is spoken of in the book by the Jesuit father Christophe and seen through the eyes of Snow Falls) and refused to be condoled in a rite that would eliminate the need for this great expression of sorrow. Refusing the Great Peace would have been an insult that would not be easily forgiven, and thus sparked a continuation of the Mourning Wars.

My people are relegated to being the monsters of whom everyone is terrified, whom Bird’s war bearers constantly test their mettle against. My people, who are such eloquent defenders of the Great Peace and the authors of the Two Row Wampum, are the bogeyman in the night, a horror story told to children to make them behave. This does not compute and I reject this idea of us. It’s a colonial idea and not worthy of a writer like Boyden.

The character of Christophe was also a cipher to me. The people who came to settle at Six Nations had thoroughly rejected Catholicism, so perhaps I’m viewing his religious zeal through the eye of my colonized Anglican upbringing, but his fierce faith made me scoff. I’ve long had the same problem with the Jesuits as my ancestors did, their missionary zeal raising my hackles. So I quite frankly didn’t care about him and found his attempts at converting rather laughable. And it probably was as is portrayed – that the people accepted Catholicism in extremity, when all the children were dying and their crops had failed.  And let’s not even go there about his demise. I don’t buy the stoically clinging to your faith while being tortured thing. It sounds like Jesuit propaganda to me.

There was also the idea that Snow Falls and the Anishnaabe woman Gosling were “magical.” While I have no doubt that Haudenosaunee girls aged 3 to 10 are magical, and I do believe in the medicine ways of the Anishnaabe, I really dislike the idea of making women “magical.” To do so negates their humanity, makes them viewed as mystical creatures that cannot possibly be real. In this colonial culture, does this not reinforce our already-nebulous status? I found myself cringing whenever anyone commented or felt that these characters’ strong powers of intuition and empathy were magical, and this served to pull me out of the book.

Eventually, I got tired of the endless descriptions of torture and the thrilling canoe chases and siege tactics.  It’s a boys’ adventure novel disguised in beautiful prose. I enjoyed the first third of the book much more than the last two-thirds. It is the set and setting of the stage that thrilled me and made me dream of the Old Days for three consecutive nights. I would fall asleep and have dreams of endless cornfields and the smoke of cooking fires and children’s laughter echoing through the trees. For this reason alone, I liked the beginning of the book.
However, it is certainly not the novel I wanted to read when I first heard about it.

Guess that means I have to write my own.

My favourite quote: “We are this place. This place is us.” Absolutely. This is our territory, and our story (as yet) remains untold.
Posted by RedIndianGirl at 2:42 PM